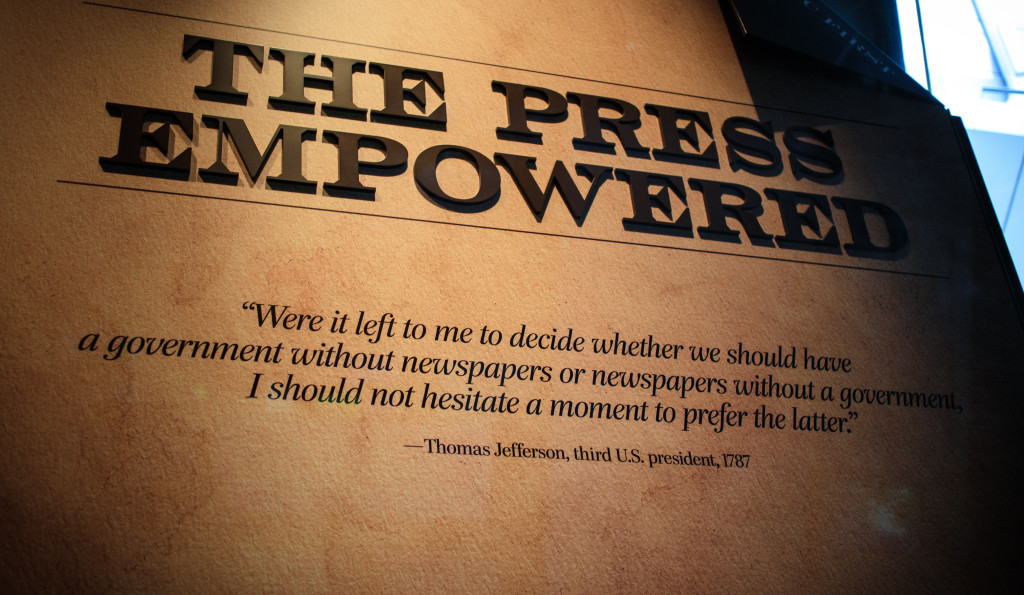 Quote from Thomas Jefferson in the Newsium in Washington, DC

I have been hearing and reading a lot of negative things about the media, press and journalists. It has been a constant and concerted effort of a minority of people to get the majority to believe that journalists are telling lies and can’t be trusted. I believe the biggest problem facing our country right now is that this effort is working.

Our current president makes dangerous and untrue statements about the media on a nearly daily basis. He repeats the lies that are told by alternative media sources that only exist because of their agenda. He has claimed that the media and journalists are “enemies of the people”, which is so obviously untrue that it boggles the minds of intelligent people that anyone can possibly believe it. So, I am going to tell some truths about journalism and journalists.

Second, the media is in a constant battle to be first. If you are first, you win and everyone applauds your effort. If you are second, you are just copying the other guy’s story.

Third, journalists are people. Which is great when they can use that to bring humanity and perspective to the story (KKK child and black policeman). It sucks when they make a mistake (MLK Bust).

Fourth, media outlets are businesses. This really is unfortunate, but it means that journalism and journalists sometimes take a back seat to reporting on what sells. That means they will try to get your attention with over the top headlines and make the weather news seem like the next apocalypse. And it means that they stalk the president like an ex after an unexpected break-up. All because it gets your attention for just a second.

So between the people that have an agenda and are willing to lie to convince you of their worldview (I’m looking at you Breitbart and US Uncut) and media sources that have added clickbait to their regular journalism (CNN), it is very difficult to find the places that journalism still reigns supreme (NY Times, Washington Post, The Guardian, Bloomberg News).

This is further exacerbated by politicians supporting “fact-free” and “alternative fact” positions. It is incredible to me that people find politians of any flavor to be more trustworthy than the press. To give you an example, if 99% of scientists agree on something such as global warming, to take a position that denies science is not a conservative opinion, it is just wrong or you don’t understand how science works, which makes the position both wrong and ignorant. However, some conservative politicians are taking the view that any media outlet that says global warming is caused by humans is a liberal bias. Then, some people believe that. Which means they think that unbiased, fact-based reporting has a liberal bias, when the actual facts are presented. Facts and truth are not biased, however, the current political climate has made them both liberal. Which, as a liberal, means the truth is literally on my side. That actually makes me sad. We are meant to be discussing different policies to deal with the what is happening and arguing what is the right path forward. We are not supposed to be debating if science is real and what facts are, or which facts can be trusted because they support what I already believe.

Journalism has long been called the Fourth Estate. That means that we have three branches of government and the media to watch them and call them out for the lies they tell, the exaggerations they make and to find the truth that they hide.

What is required of us as citizens of the United States and the world is to question. Question authority. Question ourselves. Question our positions and why we have those policy positions. Question what we believe and why we believe it. Question whether the sources of news we are currently using are telling us the truth or just what we want to hear. Question our media outlets as to why they are covering a story and if they are presenting both sides of the story.

Journalism and the media help us find truth in the dignity of people and exposes the depravity of humanity. It brings us together and illuminates our division. When you understand someone else’s life that you have never met, and feel the grit, determination, hate and love that drives them, thank a journalist.

Seattle wedding and portrait photographer View all posts by admin